What is Included in my Woodworking Plans?

I am often cautious when purchasing digital products. Because unlike going into a physical shop, you cannot see the product, feel the product or try the product. And I am often left underwhelmed upon opening my newly downloaded document to find it's not what I expected at all.

In this short article, I want to dispel any concern you may have towards purchasing plans or downloadable documents from this site and ensure you know exactly what you are buying.

When you open the product page on a set of plans in my store, you will see an image of the project, a set of blurred working drawings, construction notes and cutting list, and a 3D model of the project. This will allow you to see how those specific plans are roughly formatted. Reading the description will also give you some further information.

The Working Drawings are what fills up the majority of the downloadable documents. In simple projects such as the Book Stand pictured to the right, these will only be one or two pages. On more complicated projects such as my Ramped Shooting Board or Power Tool Workbench, significantly more pages can be found!

It's worth saying that these Working Drawings are only available in metric. This is because tends to be easier for imperial users to convert to metric than vice versa.

Also, lets be real. No one wants to delegate precious brain power toward subtracting 17/64 from 25/32. 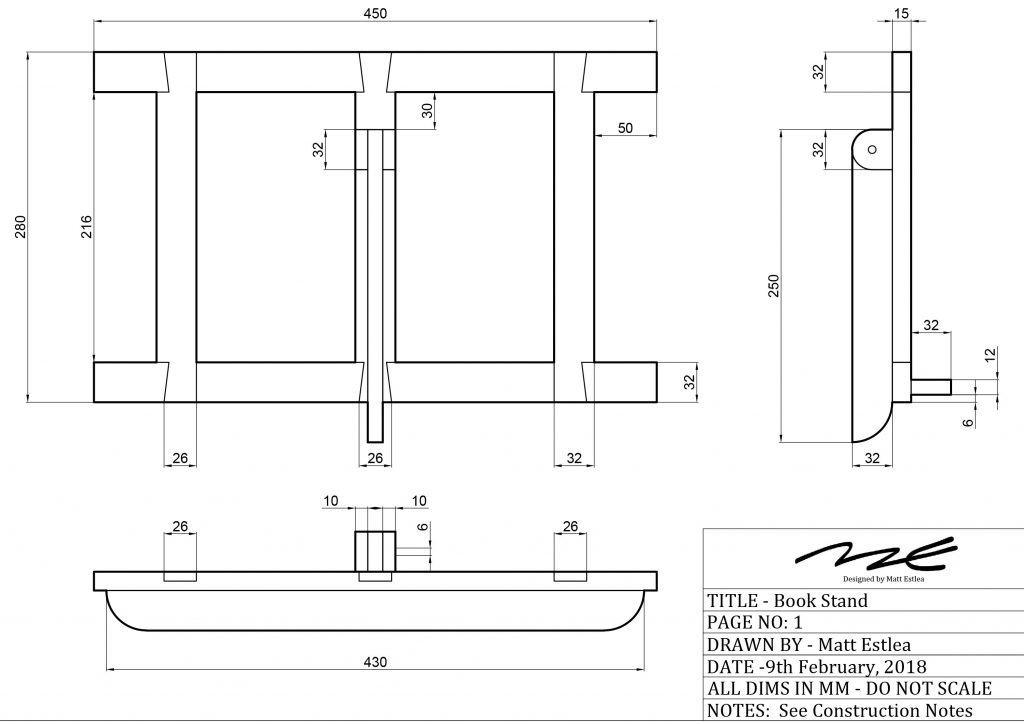 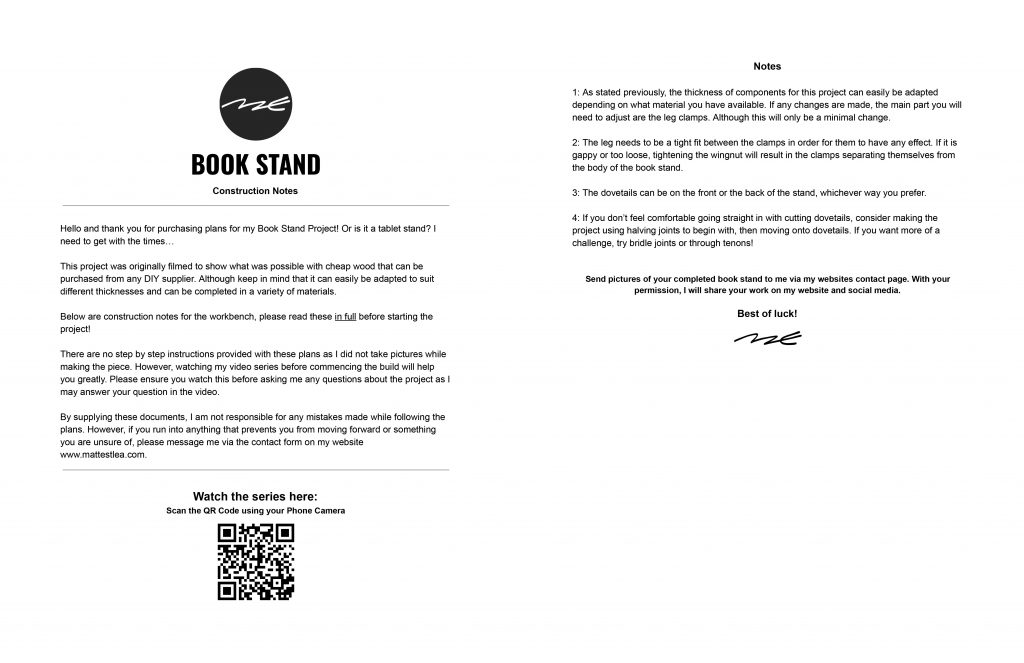 When designing your own projects, you don't necessarily need construction notes as most the information is stored mentally. But this doesn't lend itself very well when trying to follow someone else's plans.

The construction notes will detail important information regarding topics such as hardware sourcing and installation, tips for assembly and guidance on materials among many other things. While these are not step-by-step instructions, it is recommended that these are thoroughly studied before beginning the project as they will save you a lot of headaches!

While I try to make my working drawings as user friendly and intelligible as possible, inevitable there will be areas that can cause confusion.

I now include a SketchUp model with all sets of plans that can easily be accessed via the SketchUp website or by using the downloaded application. As of writing this guide, you do not need an account to view the 3D model files online.

Simply type ‘SketchUp For Web' into Google and among the top results will be a browser version of SketchUp that doesn't require any downloading at all. Simply upload my plans to the website and they will pop up in front of you! 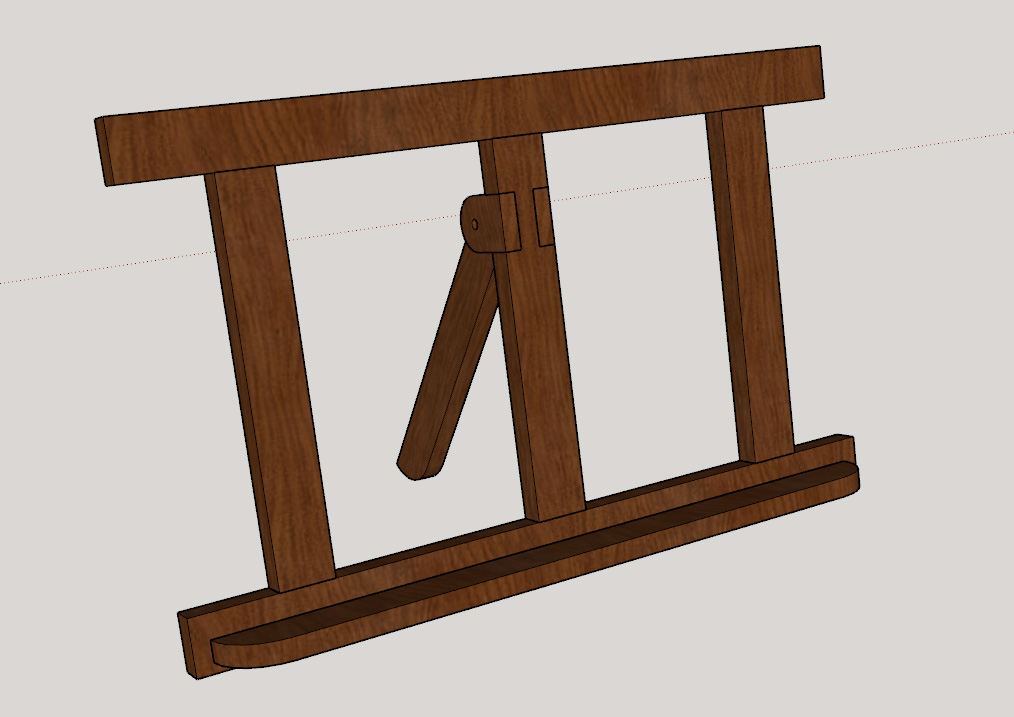 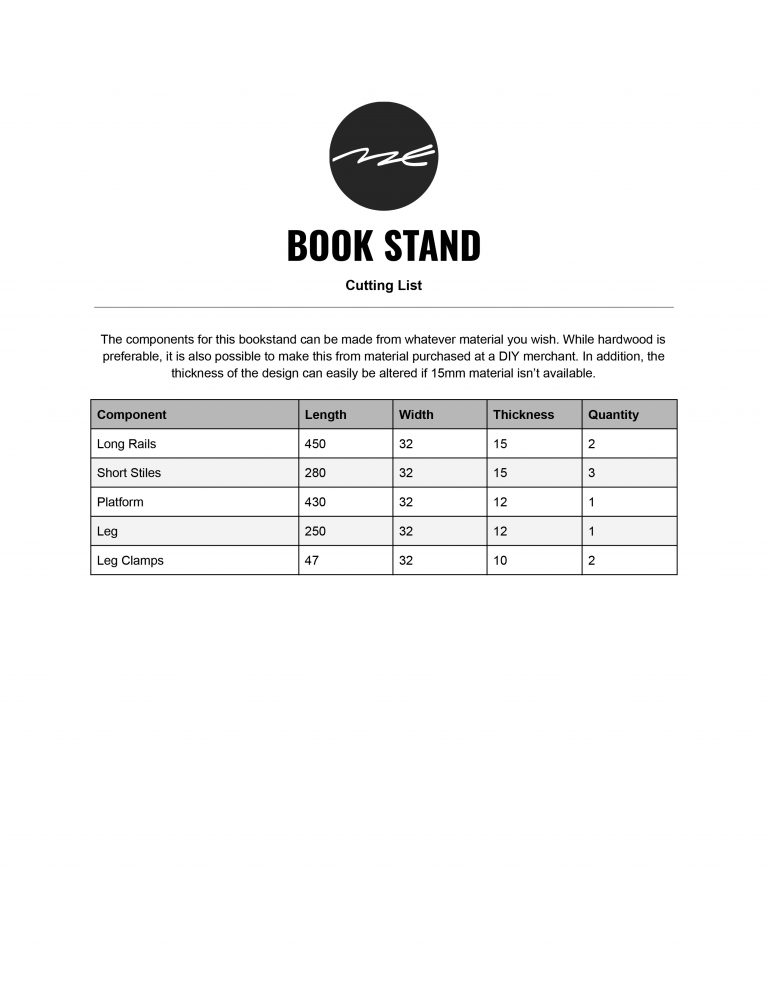 After many requests, I am finally including cutting lists with all sets of plans. Yes, that includes the workbenches!

I was reluctant to do this at first as incorrect use of a cutting list can often cause annoying or potentially expensive mistakes. If you cut everything to its final size before assembling the first component, you are asking for trouble. This is because multiple small errors will add up and cause huge errors later on. It's often best to measure directly off the project to confirm your measurements, instead of diligently following a number on a piece of paper.

On larger projects, I recommend following the cutting list in batches according to what stage of the build you are at. On smaller projects such as this book stand, you can get away with cutting them all to final size straight away

How are the plans priced?

The plans are priced according to how long they took to create and how many pages of working drawings are included. This is based on my own formula that I believe keeps the price fair.

For projects within my Free Online Woodworking School, the formula is adjusted to create a lower price to make the plans more accessible to everyone.

You will also find a selection of Free Plans in my store that I felt had no need to be paid for. These are a great introduction to anyone wanting to try following plans for the first time and test opening 3D SketchUp Model files.

Do you offer refunds?

Unfortunately, I cannot offer refunds for my plans due to the downloadable nature of the files. Exceptions can be made in certain circumstances however. Just send me an email via my contact page and I will get back to you.

What format are the files?

Upon purchase, you will be taken to a page where you can download the file to your computor. If you make an account on my website, these plans will also be saved in your downloads folder for later access.

The file is downloaded as a .zip file which simply needs double clicking to open. Inside the .zip file, you will find the Working Drawings, Construction Notes, and Cutting List as individual .PDF documents. The 3D SketchUp model will be a .SKP that can only opened on the SketchUp application, or in the browser version. In some cases, these can also be opened on other 3D Modelling software however I cannot guarantee it.

I hope this article has clarified any questions you may have about my plans. I want you to be fully confident in your purchasing decision before clicking the buy button. If you have any questions, please send me a message via my contact page. I will be happy to help you out!

In the meantime, please join me in congratulating the individuals below who successfully built a project following my plans. Who knows? Maybe one day you will see your piece on here!

This site uses Akismet to reduce spam. Learn how your comment data is processed.